skip to main | skip to sidebar

As a magician and entertainer it is important and critical to the show that the audience is engaged by and very interested in the experience or story I'm sharing as opposed to just looking at the effects that are taking place.

The experience and/or story are there to support the magic but are key element to creating entertainment and not just a "look at me and the tricks I'm doing, aren't I cool" sort of thing.

See More at Illusions by Vick
Posted by Illusions By Vick at 1:16 PM No comments:

Just updated so I thought to post it here 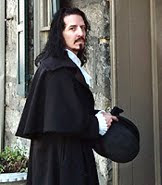 
Mission Statement - An artist and entertainer who’s chosen medium is performing magic. It’s my calling (and profession) to accompany you on a one of a kind journey, creating astonishment while delivering enchantments for you to contemplate and appreciate. To create an experience that engages you and encourages you to think and feel. To share something that touches you in the now and leaves you with you something to consider in the future. From a place where anything can happen and the ordinary can become the incredible. Wrapping interesting and intriguing stories around incredible effects thereby creating the experience we call magic (all while a smile plays around your lips).

Professional performing experience includes some very challenging and rewarding performance situations. For 3 years I was the lead entertainer at Muvico Theaters (now Cinemark) a 24 screen multiplex with an approximately 6,400 patron seating capacity in Arundel Mills, Maryland. Was featured doing warm up with movie going patrons, performing up to 25 times a day, 3 days a week. The entertainment was magic based and included skits, stand up comedy, character acting and story telling. I brought to life many leading characters from featured movies for patrons’ entertainment including Professor Snape, Willie Wonka, Captain Hook, Pirates and various medieval characters. We created all our own material including scripts, costuming and staging. While it was a great experience I left after 3 years as I had accomplished all I felt I could in that venue.

For 6 months of 2008 I was the featured illusionist for the Golden Triangle Cabaret on M Street at Club Ozio in Washington DC. The Golden Triangle Cabaret is a 1940’s theme Burlesque Review. While the show was being performed weekly I was performing two or three 10 to12 minutes spots of magic during each performance. The featured burlesque artist left and the show moved to a monthly performance schedule so I chose to leave the ensemble.

In 2011 am most often performing the Illusions by Vick stage or parlor show at various venues both public and private. Run time is approximately 45 minutes.

The Illusions by Vick show has been fortunate to play many venues which include but are not limited to the Oakland Mills Auditorium, Hillwood Museum, Harmon Center for the Arts, B & O Railroad Museum, Baltimore Harborplace Amphitheater, Grand Atrium, Magooby's Joke House and numerous public auditoriums, nightclubs and theaters. Everywhere from Mercedes Benz Dealerships to the Great Ape House in the National Zoo, beautiful assisted living communities with excellent theaters that easily seat 200 guests to performing as Professor Snape in the "dungeon" at the Annapolis Bookstore.

A short description of self, study and influences- Unique (aren't we all), resourceful, responsible, truthful, determined, hardworking, adventurous, occasionally charming and reasonably well spoken. I’m driven by a sincere desire to elevate the art of magic and to help return the art to the lofty standards and high regard it was once held in. Am always learning and eager to learn more. The works of Sam H. Sharpe have been a huge influence on my thought process regarding magic and performing (as well as the Fitzkie Trilogy, "Our Magic", Tommy Wonder, Robert-Houdin and Henning Nelms "Magic and Showmanship"). There are many schools of thought and great ideas.

Have been incredibly fortunate to be given guidance by an enigmatic figure (an actual card man) whose name I obviously cannot mention and to whom I owe a huge debt and gratitude. Also the very talented and respected Denny Haney has been kind enough to assist with direction in the art (and putting up with my questions). Jeff McBride was generous enough to help with one of my pieces. As part of my continuing education I often attend lectures, some of my favorites being Joanie Spina, Banachek, John Carney (twice), Darwin Ortiz, Michael Ammar, Howie Schwartzman, Christian Painter and David London. I consider myself extremely fortunate to have worked briefly with Joanie Spina and she made a huge, positive impact on my work. She is an amazing talent, director, teacher and humanitarian.

Much of the influences on my performing come from outside of the world of magic and include film, literature and music. Create something that engages minds so they think and feel and you have created art


What you receive when hiring Illusions by Vick – All the experience, determination and talent go into creating, performing and providing you and your guests with a unique, sophisticated and unparalleled entertainment experience. Every performance is more than just my dream; it’s my name and reputation on the line. More than that it’s also yours. How well I perform and the enchantment around the effects is the art. How well you and your guests enjoy it and will have Illusions by Vick back next year, the years after that and recommend Illusions by Vick is part of the business. I understand the importance of both the entertainment/artistic side and the business side and am able bring them together. I have to succeed at both for us to be satisfied. Anything less is unacceptable. When you pull back the curtain and peek you see that sometimes show business = 10% show + 90% business.
Posted by Illusions By Vick at 9:37 PM No comments:

On Sunday an article ran in the Washington Post which I was interviewed for. While I only had a one line mention in the article
http://www.washingtonpost.com/local/magical-iphone-put-to-use-in-actual-magic/2011/07/15/gIQA6FqSKI_story_1.html here is part of the email I sent to writer Michael Rosenwald before the interview about Smartphones, aps and magic

Yes I'd be glad to share information and perspective on why I don't use technology in my work. I'll give you an overview here, a lot of it has to do with performing and presentation.

One of the keys to presenting good magic is to keep it from becoming a simple "trick" or puzzle and to keep it entertaining (why much of what I present is in narrative from that the audience can relate to) and make it an encompassing experience. Presenting a puzzle which many I-phone type aps or other magic aps do is a lose-lose situation for a magician.

If you show the audience a performance of magical entertainment that they become emotionally invested in, that stays with them. If you show them a tech trick it's just passing eye candy. They take nothing away from that experience.

Technology can also remove the human factor in performing entertaining magic (the audience has to like or at the very least have some emotional investment in the character performing, think about a movie, if you don't feel about the characters in some form the movie doesn't work), it can too easily become a "look at this, isn't it really cool" presentation as opposed to a human interaction that is amazing.

That all being said there are performers like Marco Tempest (who bills himself as a techoillusionist) who are doing amazing things, but he is an exception. The usual having a ghost or card show up on an I-Phone is too much like a "trick" or puzzle and not enough like an entertainment experience.

The focus while performing should be on the entertainer and not a piece of electronic equipment. If I'm showing a "trick" on my phone, who is doing the magic? The performer or the phone? Who's show is it? The magic has to have a source.

Kind of do we want to present Shakespeare or do we want to play a video game? Both have their place as entertainment but it's too easy to slide into simple tricks with a lot of technology instead of a real, emotionally moving (and I include humor in emotional investment) human to human entertainment experience. I want the audience to be moved or invested emotionally in some way. Doing it with technology can make it even more challenging and if not handled well adds another barrier to reaching that goal. Can you really decide to "like" a piece of equipment?
Posted by Illusions By Vick at 5:53 PM No comments:

Illusions By Vick
Purveyor of Unique, Thought Provoking and Amazing Magical Experiences. Enter a world of conjuring where nothing is impossible and even the seemingly ordinary can become incredible.